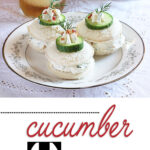 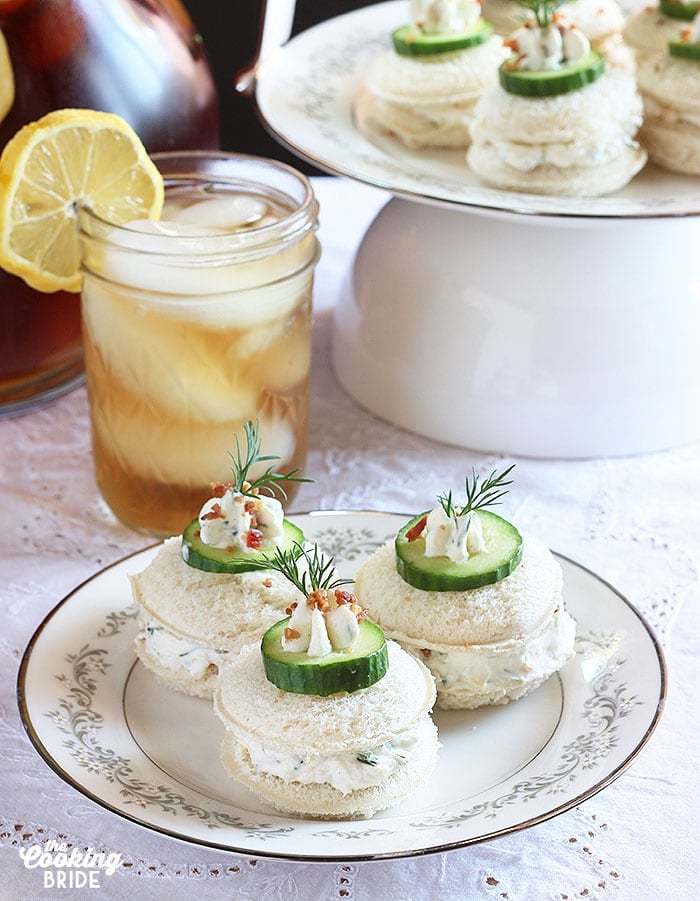 Special occasions, such as a bridal tea or a baby shower, usually call for a large platter of cucumber sandwiches. elegantly presented on a piece of Wilton pewter or McCarty pottery. These sophisticated, yet really tasty, finger foods didn’t originate in the South. The English have been serving thinly sliced cucumbers layered between two pieces of lightly buttered bread with their afternoon tea for centuries.

Or course, we had to go and add cream cheese. Nothing at all wrong with that. In fact, I like this version better.

Best type of cucumber to use

If you have an abundance of fresh cucumbers growing in your garden right now, by all means use them! But if you are looking to buy a cucumber, I recommend English cucumbers. Sometimes they are referred to as hot house cucumbers or seedless cucumbers. They have thin skins, which means you don’t have to peel them unless you want to, and small seeds. They also contain less water than regular cucumbers, which can prevent your sandwich from getting soggy.

How to Make The Cucumber Spread

Before you get started, set out one eight-ounce package of cream cheese to come to room temperature. It’s much easier to work with and add in ingredients when it’s soft. This should take about 30 minutes depending on the temperature of your house. While you’re waiting for the cream cheese to soften, grate about half a cucumber (depending on the size). You’ll need three tablespoons of grated cuke. 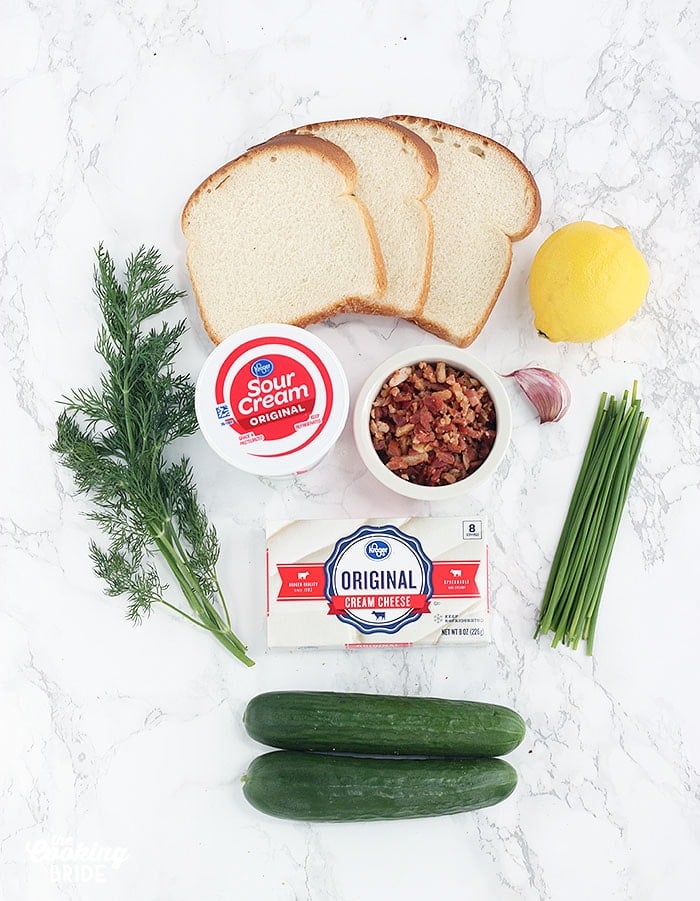 You’ll also need to zest one lemon. Zesting just means we are going to scrape off the very top layer of the lemon peel, where all the oils are stored. You can do this with a microplane or the small edge of a box grater. Simply rub the microplane against the outside of a whole lemon for a few seconds. Once you begin to see the white pith underneath, stop grating and move to the next spot. 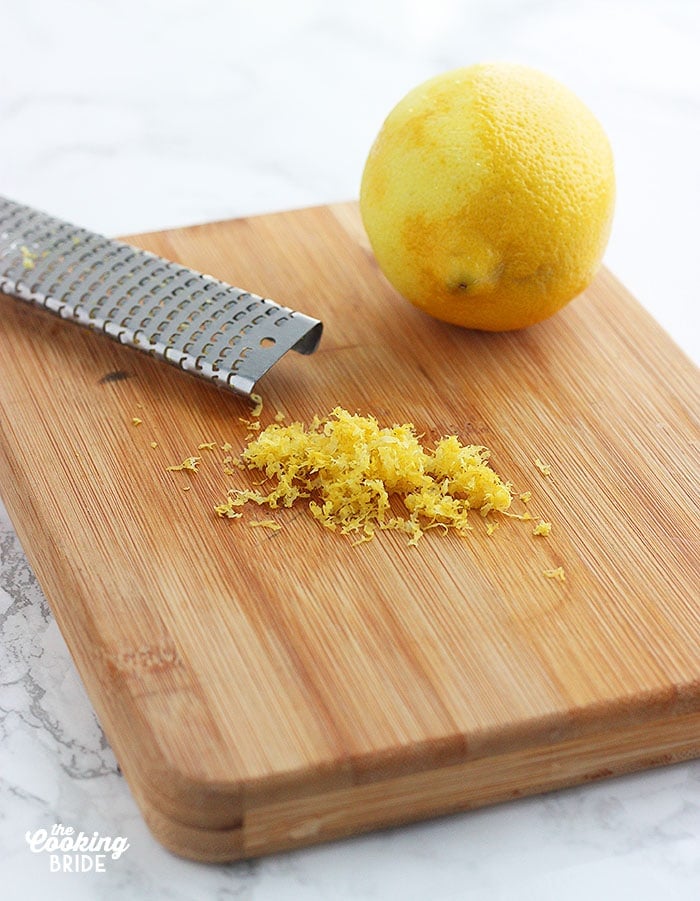 The cream cheese should be soft and pliable by now. Scrape it into a bowl and add one cup of sour cream. the lemon zest, and two tablespoons of fresh lemon juice (use the juice from lemon you just zested).

Next, add three tablespoons of minced fresh dill. Make sure you are using dill weed, which is the green, leafy part of the plant, and not dill seed. Stir in two tablespoons of chopped fresh chives. You could also use green onions.

Additionally, add one clove of finely minced garlic. Personally, I like to used a garlic press for this. I want to add garlic flavor without biting into chunks of garlic. A garlic press does a really good job of doing this.

Finally, add the grated cucumber and 1/4 cup bacon bits. Fresh or store bought is fine. Stir everything together until everything is mixed through evenly. Then season with salt and pepper to your preference.

Traditionally, cucumber sandwiches are served on pillowy soft white bread with the crusts cut off. I’m talking about the same white bread you might use for a good tomato sandwich. The kind that sticks to the roof of your mouth after a bite. Other suggestions would be wheat bread or party-sized pumpernickel.

I used plain white bread cut into 5-inch rounds. A five-inch diameter allowed me to use one slice of bread for both the top and bottom of each sandwich. I used the rim of a shot glass to cut out my rounds. This wasn’t ideal because the edges were rounded and wouldn’t cut all the way through the bread. I ended up having to trim around the glass with a sharp knife for a good clean edge. I wholeheartedly recommend using a five-inch cookie cutter instead. 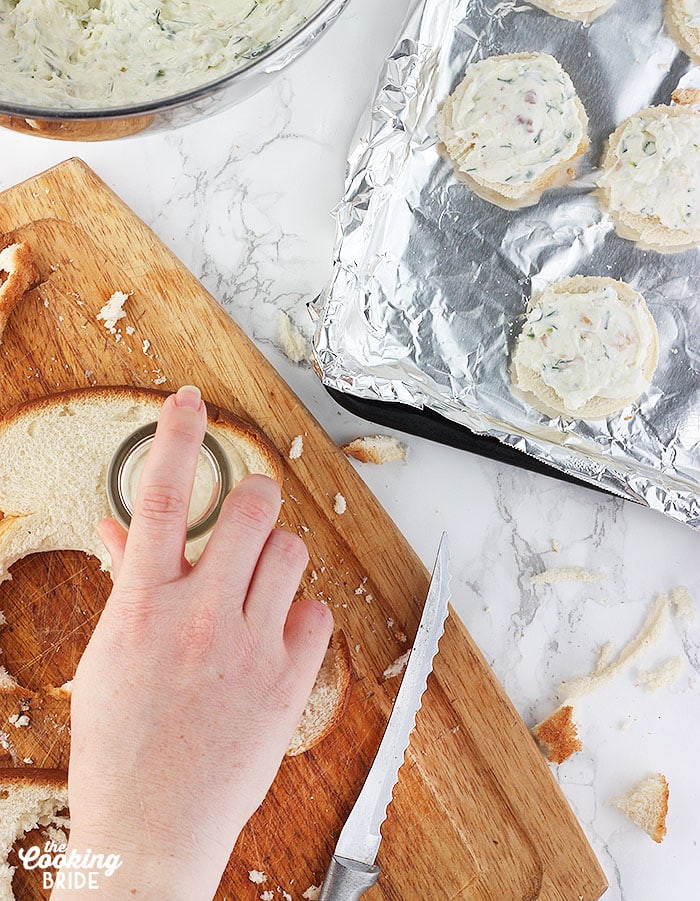 Be sure to keep your bread under wraps while you work, as it dries out very quickly. Only remove a few bread slices at a time to cut. Store any cut slices in a plastic bag or a covered container until ready to use.

How to Make Cucumber Tea Sandwiches

Now comes the easy part — assembling the sandwiches! Simply spread an ample amount of the cream cheese mixture on one side of a bread round. Top with another bread round.

You can serve the cucumber tea sandwiches as is. But it you wanted to jazz them up a bit, I piped a small dot of the filling on the top of each sandwich, then placed one cucumber slice over the top. The dot of filling acts as glue to hold the cucumber slice in place. 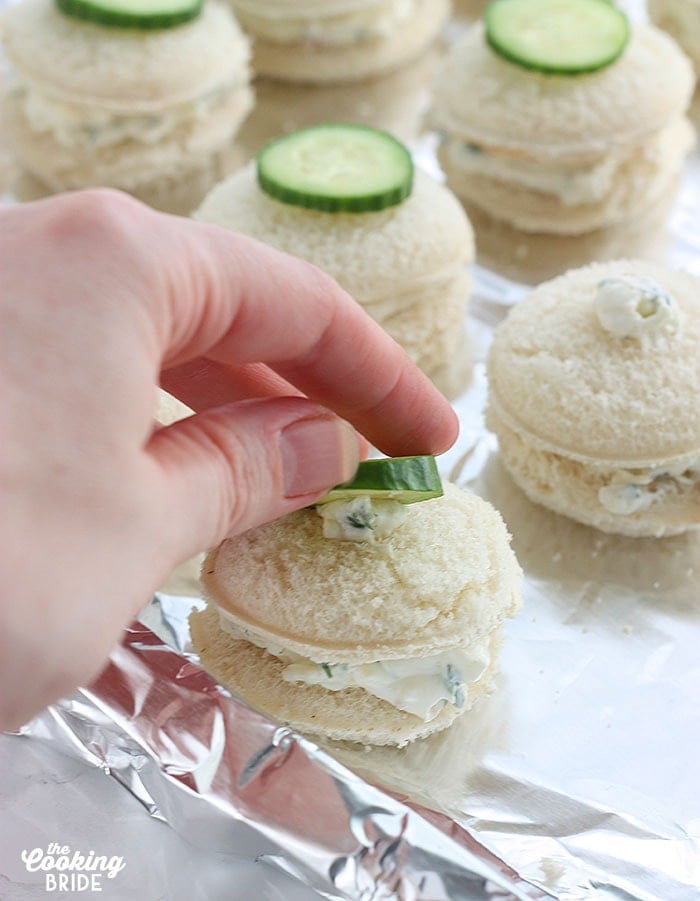 I even went a step further and piped an additional dot of filling on the top of each cucumber slice using my handy Wilton 5-Piece Cake Decorating Kit fitted with the star tip. I am not a cake decorator, but this little contraption makes piping super easy. Finally, I topped each sandwich with a small frond of dill weed and a sprinkling of chopped bacon bits. 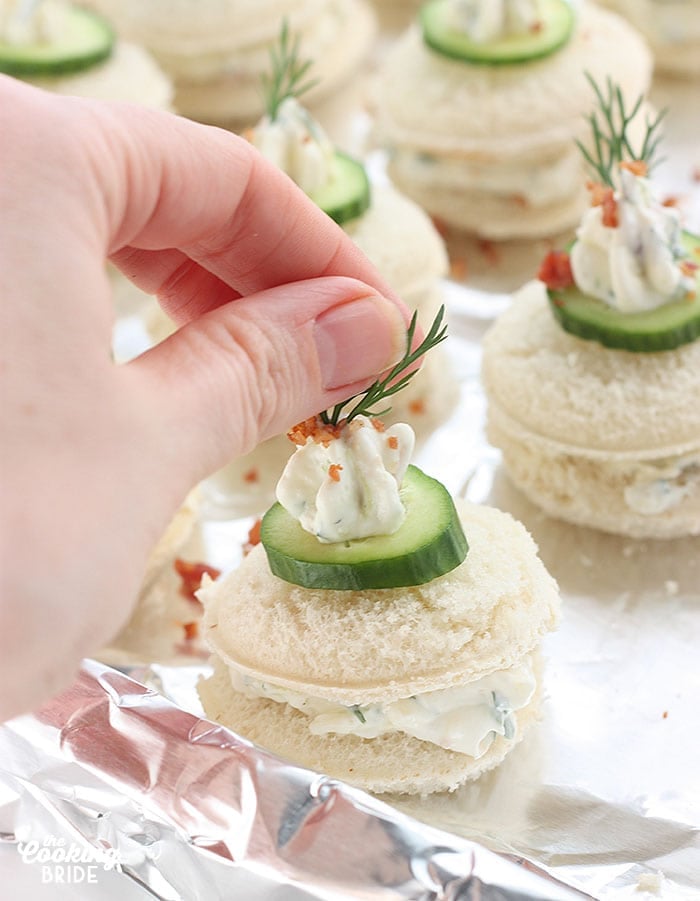 Can Cucumber Sandwiches be Made Ahead of Time?

You can make the sandwich spread a few days ahead of time. Store it in an airtight container in the refrigerator. Let it comes to room temperature before assembling the sandwiches so it is easier to spread.

Cucumber tea sandwiches can be assembled the day before. However, if you are planning to add the extra touches like I did, I would wait and do that closer to serving time. Arrange the sandwiches in a single layer in an airtight container. Cover that layer with waxed paper. You can then loosely stack another layer on top. Don’t pack them in too tightly or you could end up squishing the soft bread. Keep the container sealed and store them in the refrigerator.

Assembled sandwiches should not be left out at room temperature for more than two hours.

Unused sandwich spread should be used within 10 days. Assembled sandwiches should be eaten with a day or two. The longer they sit, the more likely the bread will either dry out or become soggy — neither of which is an appetizing option.

While cucumber tea sandwiches are readily associated with special occasions, that doesn’t mean you have to limit yourself. Enjoy one for lunch on a summer day or slather that cream cheese spread over your favorite sandwich. 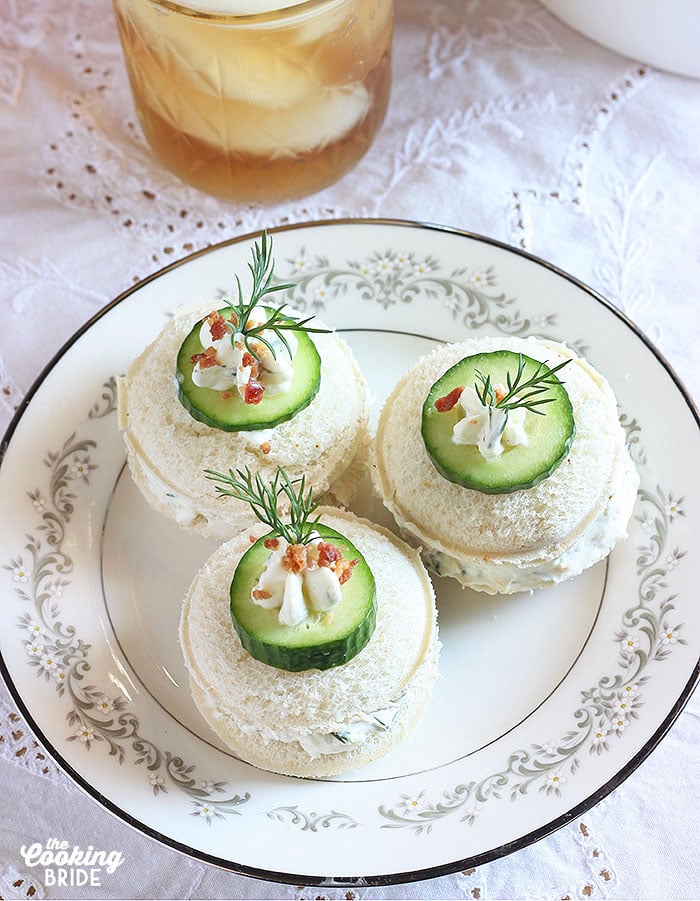 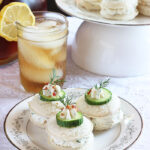 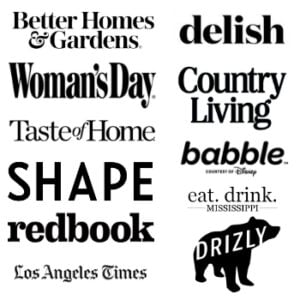 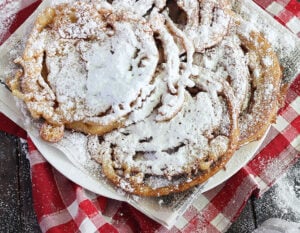 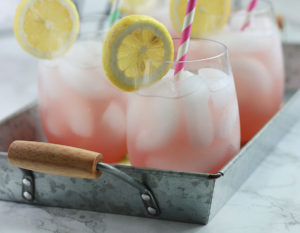 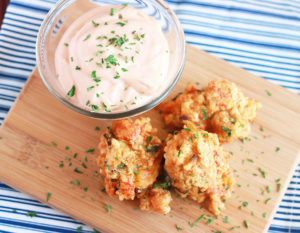